Before I get into it, here’s a relevant passage from Heidegger’s The Origin of the Work of Art in which he describes one of Van Gogh’s studies of peasant shoes (One finds oneself in a dangerously forgiving mood when reading philosophy written this beautifully.) :

A pair of peasant shoes and nothing more. And yet…From the dark opening of the worn insides of the shoes the toilsome tread of the worker stares forth. In the stiffly rugged heaviness of the shoes there is the accumulated tenacity of her slow trudge through the far-spreading and ever-uniform furrows of the field swept by a raw wind. On the leather lie the dampness and richness of the soil. Under the soles stretches the loneliness of the field-path as evening falls. In the shoes vibrates the silent call of the earth, its quite gift of the ripening grain and its unexplained self-refusal in the fallow desolation of the wintry field. The equipment is pervaded by uncomplaining worry as to the certainty of bread, the wordless joy of having once more withstood want, the trembling before the impending childbed and shivering at the surrounding menace of death. This equipment belongs to the earth, and it is protected in the world of the peasant woman. From out of this protected belonging the equipment itself rises to its resting-withing-self.

This passage was on my mind as I left the movie theater last week, having finally given Star Wars: The Last Jedi a go. It’s hard to overestimate the impact Star Wars has had on the worldview of what is now three generations of Americans, including my own. Unlike many of my compatriots, however, it’s never been a religion for me. Or at any rate, I’m an apostate. I, for one, thought the prequel movies were jolly good fun. I had no real expectations of those movies, nor for The Force Awakens. But since I was such a fan of Rian Johnson’s Brick and Looper, I’ll admit I might have set the bar a little too high for The Last Jedi. In the end, it was no better or no worse than the last four movies. Nothing gained, nothing lost. But it was apparently a real let down for the faithful because the expectations of this one were that it would dig deeply into Jedi mythology and lay down some canonical law for any future fan fiction. For me, the film’s pronounced lack of substance was actually kind of thought-provoking. I couldn’t help but think about what fantasy tells us about the truth function of art about which Heidegger is speaking in his essay.

The common distinction between sci-fi and fantasy is that sci-fi introduces fantastical things into our own world (even if it is not in our own time), whereas fantasy engages more explicitly in world-building. There is, of course, the emphasis on technology in sci-fi, but as Tolkien warns us, magical practice too should be regarded as a kind of technology. There are enough exceptions to the claim I’m about to endorse so as to render it nearly useless…but the real distinction between the two genres is not so much in the worlds created but in the positioning of the hero within those worlds. But of course, the positioning of the hero turns out to have a lot to do with the composition of those worlds. The sci-fi hero becomes a hero in spite of her world, and the fantasy hero finds a world waiting for a hero. In both cases, the author has to create a world that has already been there. It’s just that the fantasy hero has to occupy the same position as her author–namely that of finding something that has already been. The has-already-been must be on vivid display in the work of fantasy. 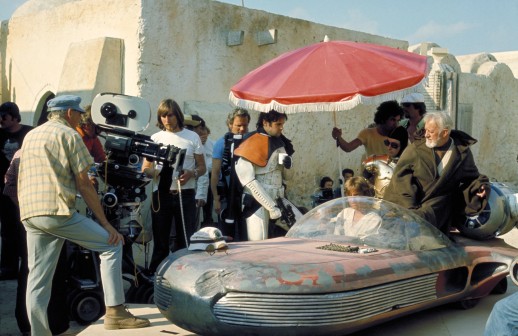 It’s been noted over and over again that the thing that distinguished the original Star Wars from space-based films that came before it was the aesthetics of its equipment. In previous films set in space, all of the suits, the gadgets, and the ships were glistening new. But Lucas showed us futuristic stuff with varying degrees of used-ness. Again, Heidegger:

Thus equipmentality wastes away, sinks into mere stuff. In such wasting, reliability vanishes. This dwindling, however, to which use-things owe their boringly obtrusive usualness, is only one more testimony to the original essence of equipmental being. The worn-out usualness of the equipment then obtrudes itself as the sole mode of being, apparently peculiar to it exclusively.

In The Last Jedi, Luke Skywalker’s part is actually written with a lot of great humor. In one scene, Luke is disabusing the young hero, Rey, of her notions about the power of the Jedi, asking if she expects him to “walk out with a laser sword and face down the whole First Order.” As everyone knows, “laser sword” is an extremely dismissive way to talk about a lightsaber and all of the magic associated with it. But that’s the point. It’s the laser sword-ness of the light saber rather than the Jedi magic of it that makes Star Wars a fantasy narrative and, possibly, a work of art. Futuristic and fantastic equipment is capable of dwindling into “boringly obtrusive usualness,” which gives it the possibility of having once been reliable (the essence of reliability being unintentional interaction). This in turn gives the world–which is in part composed of this equipment–a sense of have having already been without having to be continually invented by each intentional glance of the world’s author. The equipmental being of the “laser sword,” among other things, allows for a world that has been waiting for its hero, which is ultimately what makes the magic of that world possible.

The work of Tolkien (to which my devotion does border on the religious) grasps the idea of equipmental being on a whole other level. A philologist at the top of his game, Tolkien famously created a number of different languages for his Middle Earth. Being able to invent multiple languages with fully functional morpho-syntaxes would have alone guaranteed him literary immortality. But the truly impressive thing about Tolkien’s languages is that the words he invented came with etymologies that he did not necessarily invent. It’s true that the look and sound of Tolkien’s languages were rooted in his knowledge of Finnic, Celtic, Germanic, and Semitic languages, but that’s not it. It’s difficult to articulate, but the words of Tolkien’s languages were invented with a latent history, which means that they were formed from within their own etymological future. And within Middle Earth, only immortal beings like elves and wizards (along with the occasionally wise man or curious hobbit) understand the equipmentality of words. To the extent that magic is possible in Middle Earth, it is because these beings grasp the “thingly character” of words. To grasp the “thingly character” of words is to understand their dual nature as both channels of knowledge (their reliability) and as objects of knowledge which nonetheless also demonstrate what Heidegger says is the “self-refusal of the mere thing, this self-contained, irreducible spontaneity” (or, in other words, the impossibility of total knowledge).

Let’s return to Star Wars. The purpose of the much loathed prequel movies was to show how Anakin Skywalker became Darth Vader. But one could argue that the desire for the world of those three films was already there before we knew who Anakin was, in Obi-Wan Kenobi’s famously enigmatic line about lightsabers from the very first film: “An elegant weapon for a more civilized age.” Part of it of course is the brilliance of Alec Guinness’s delivery, but the melancholy communicated in that one line was world-building. However, the world that line helped to build was the world of the original films, not that of the prequels. It merely created a desire to see a prequel world from within the world of the original films. The affect of desire for a lost thing (the “more civilized age”) is a credit to the reality of the world of the original films. In the prequel films, the Star Wars faithful got the lost object they desired, and the attainment of that lost object horrified them. It filled them up with nothing. The nothingness of the prequel films metastasized even into explaining how the Force worked (evidently through some sort of space bacteria called midi-chlorians). The historical explanations of the prequels, in other words, destroyed the “self-contained, irreducible spontaneity” of the Star Wars world by rendering the thingly character of it into something reducible to its parts, operating by the rules of what Timothy Morton calls “billiard ball causality.”

To be sure, I think History is the most fundamental discipline. Without historical thought, even philosophy and mathematics are impossible. But there is a danger in historical thinking. Failures in fantasy narratives demonstrate the consequences of breaking the delicate balance between history and the aesthetics of the has-already-been. Breaking that balance introduces instrumental thinking, which is an expression of a more cynical, perhaps less “civilized age” (this, of course, is what Heidegger’s Nazi friends engaged in par excellence). Perhaps that’s what the Star Wars faithful were detecting in The Last Jedi. The possibilities of the heroes and the world were severely constrained by the historical mechanisms which have been built into the mythology. The villain (Kylo Ren), after all, is the one who wants to break free of the historical dialectics of the light and dark sides of the Force.