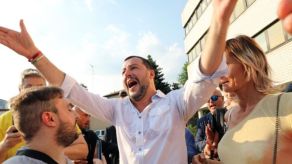 In recent weeks, Italian minister and Lega Nord leader Matteo Salvini has moved to expel as many Roma as possible from Italy, and put the rest on a registry. Comparisons to Nazi Germany and Fascist Italy seem to be the order of the day in our current political discourse (and they’re often entirely justified (re: Trump’s “summer camps” for refugee children)), but this one requires no explicit comparison. This isn’t just something out of the fascists’ playbook–it’s straight out of the fascists’ biography. Romani people endure violence from fringe groups and governments alike every day, but, sadly, it takes an act like this one–an act whose evocation of the Holocaust is all but impossible to ignore–for people to utter the phrase, “Never again.” This has to change. The fate of Europe depends on it.

The importance of antiziganism is lost on Americans, partly because Roma are much less visible in North America and because Holocaust education is incomplete, and because, let’s face it, Gypsies are far more likely to appear in Disney cartoons than history documentaries. The importance of antiziganism is not so much lost on Europeans as it is conveniently hidden. Either way, I would argue that Europe as a political entity is bound to antiziganism. Antiziganism bookends Europe.

The horrors of 20th century fascism (in which both the Jewish and Romani peoples were targeted for total annihilation) and the consolidation of the Soviet Block of course provided the political will to build European institutions like the E.U. In the decades following the Soviet Union’s collapse, former Soviet/Eastern Block countries were eager to join Europe, and with the resurgent power of Putin’s Russia, Europe was happy to have them as a political-economic bulwark. But of course the transition from Soviet Union to European Union was by no means smooth. Simmering nationalistic tensions erupted into unspeakable violence in the 1990s. Romani people were not major players in the Balkan wars, but that did not shield them from the violence, which came at them from all sides. Chauvinistic nationalism raged in other former Soviet/Eastern Block states in the 1990s as well. In places like the Czech Republic and Romania, chauvinistic nationalism manifested itself as antiziganism, and it has not really let up to this day.

With their newfound status as citizens of Europe, many Roma have sought escape from persecution and economic hardship elsewhere. Some have prospered. Others have met with more discrimination. Again, what is happening in Italy is a particularly odious example of antiziganism but it’s not isolated—certainly not in Italy, and not in Western Europe either. The perceived economic unproductivity and criminality of Romani people is one of the most powerful rhetorical weapons in the Eurosceptic’s arsenal. The movement of Roma is an easy way to stoke resentment about the collapse of internal borders and the decline of national sovereignty in Europe. Roma, after all, are coming from inside of Europe. Remember that fascists always create internal enemies before they move on to external aggression.

There’s no doubt that images of refugee columns from the Middle East in recent years provided a lightning rod for neo-fascists and Eurosceptics. Such images were thought to have been decisive in, for instance, the Brexit vote in 2016, and their impact cannot be overstated. However, concerns about the erosion of national sovereignty during the Brexit debate were directed at migration from other E.U. states, and this continues to be a serious structural problem as Great Britain tries to figure out how to actually implement Brexit. And though Romani migrants come from many countries, the problem of ‘Romanian’ migrants in particular serves as code for the Roma Question. So much so that politicians in Romania, fearing that the confusion between Roma and Romania* has so damaged the Romanian brand, have sought to create an official distinction between Romanian Roma and, well, proper Romanians (using the pejorative Tsigane for Roma). At least Salvini got his terminology straight.

Antiziganism was there at the beginning of Europe, and it may well be there at its end. Part of the reason why Romani people are such easy targets is that they are a stateless people. Europe’s cosmopolitan redefinition of citizenship was supposed to address this problem. With Europe as a political entity, one’s status as a sovereign subject need not depend upon ethnic membership within an ethnically defined nation-state. The desire to reshape the borders of a state to fit the nation created the devastation from whose ashes Europe emerged. The recognition of the Roma as a people with the same rights as any other European citizen is an enduring test to the idea of Europe. If Europe fails that test, Europe itself may fail.

*For the record, the similarity between Romanian and Roma or Romani is a matter of linguistic coincidence. Romania is a legacy of the Roman Empire’s sustained presence in the region, as well as its linguistic legacy in Romanian. Roma along its feminine adjectival form Romani (as in i Romani chib or ‘the Romani language’) is an endonym that the Romani people brought with them as they entered Europe in the Middle Ages. The confusion is exacerbated by the fact that Roma were kept as slaves in Wallachia during roughly the same time period that African slaves were kept in the New World. Centuries of slavery meant that a significant percentage of the world’s Romani population was concentrated in what is now Romania.

The Motley News
ECOLOGY WITHOUT NATURE